The Netflix catalog has something for all tastes: fiction, documentaries, series of any theme. An interesting niche among its titles is feminism, since in addition to important documentaries on the subject it offers fiction films with relevant lessons for female empowerment.

If you are a person who wants to take the first steps towards deconstruction and feminist social consciousness, these films are for you.

This documentary explores the experience of a dozen feminists (including the actresses Jane Fonda and Lily Tomlin) to analyze the impact of feminism of the 1970s on contemporary life. Portraits of feminism picks up the reflections of these women activists around what has changed and what remains to be changed to break down the walls that limit the current woman. It is not a profound treatise on feminism but a good gateway for those who begin to get involved with the issue.

The first film produced by actress and comedian Rebel Wilson is an ode to romantic comedies. It might sound counterintuitive to include a romantic comedy in this list, except that the script is not romantic? He subverts that cinematographic genre and focuses more on other types of lessons for his protagonist, such as understanding that the person who must love the most is herself, with all her virtues and defects. Self-love, a subtle critique of romantic love and a deep investigation of one of the most popular genres of cinema.

This lovely teen comedy is much more self-conscious than most of the fictions on this list. Dumplin ‘shows the way of four girls who sign up for a beauty contest to challenge the conventions of their small town in South Texas. In addition to a message of sorority for teenagers, this film focuses on the body-positive movement: be comfortable with your body and love you even if you do not fit the beauty standards imposed by society.

The first Netflix film produced in Nigeria shows the various talents of Genevieve Nnaji, who wrote, directed and starred in this feature film. Lionheart tells the story of Adaeze Obiagu, a business woman who assumes her father’s responsibilities in the family business when he falls ill. However, he must confront his own brother to show that he is capable of doing that work. A woman breaking the glass ceiling, in a world of men, in a society on the other side of the world. Several lessons to be learned in this film.

Although this film did not impress critics when it premiered in 2003, it was one of the first Hollywood films of this century to dare to tell stories about women in conflict about their life choices. Written by two men and directed by another, its cast is almost entirely female (except for the inevitable romantic interests in a female story of its time). The smile of Mona Lisa is a story about a group of young people of the mid-twentieth century who are faced with a reality unknown to them until then: the possibility of making their own decisions regarding their university education and life after graduation.

This comedy is brutally honest about the challenges of contemporary young women. The incredible Jessica James raises several pertinent questions: can you be an independent and strong woman and at the same time want to find a romantic and cheesy couple? Can you try to find yourself while still being economically self-sufficient? yourself but not lose your self-esteem? It also presents women of different racial origins in a cosmopolitan city, fighting for their dreams.

To continue with the ideological and philosophical introduction to contemporary feminism it is necessary to continue reviewing the second wave of this movement. She’s Beautiful When She’s Angry is a documentary that breaks with the stereotypes that feminists are bitter and hateful. It shows the lives and actions of the women who drove the feminist movement in the 1970s, as well as their creativity and the tireless struggle they gave and that impacted today’s daily life.

This Oscar-nominated film is an emotional story about a group of women who come together to fight oppression. It is slightly problematic because it presents a Caucasian woman as the catalytic force of the African-American liberation, however it has a message of sorority regarding the protagonists of the main plot.

A group of domestic workers join forces to denounce the mistreatment of their employers in a time of high racial segregation in the United States. Simultaneously, these women influence the lives of young city women in the city who understand that they need to break free from the gender stereotypes of the mid-20th century in the southern United States.

This documentary by Andrew Morgan is not exactly about feminism, but about an industry strongly linked to the female market: fashion. In The True Cost, Morgan explores various angles of the fast, disposable fashion industry, such as the living conditions of its workers and the oppressive labor policies of transnational companies. His final message is the need for social and economic awareness in the consumption of these garments, as their production terribly affects low-income women in developing countries.

This documentary directed by Jennifer Siebel Newsom shows the way in which the mass media contribute to the lack of representation of women in positions of influence. It shows interviews with young people who have been influenced by media messages and with women in decision-making positions or with influence in politics or the entertainment industry. 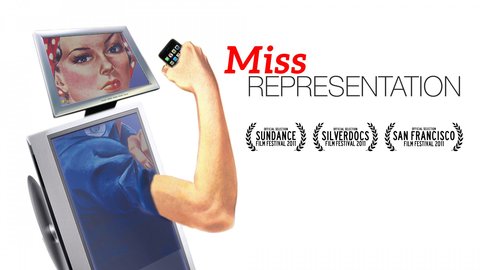